I've always encouraged my kids to be dreamers. Having been accused of being one myself, I know the value in dreams: sometimes they come true. So as my children become more worldly and more attuned to the fact there is life outside of eastern Montana, their dreams also become bigger. Pittsburgh? or Paris? Can you guess which one wants to go where?

As I sat down to write this post, I also had another question to pose this as: Three Rivers Stadium or the Eiffel Tower? It was at that moment that I learned I may have somewhat lost my touch as a Pennsylvanian. Danish Cowboy, who is distinctly not from that state, informed me that Three Rivers no longer exists. It was imploded 14 years ago. And I had no idea. Ouch. Go Steelers.

At seven years old, my little guy isn't old enough to distinguish Heinz Field from Three Rivers, but at the rate he is catching on to football life, it won't be long until I am shamed for my lack of knowledge. But thankfully for my little girl, the Eiffel Tower still looms beautifully over the Paris cityscape and I can dream right along with her about the day when I can go back to Europe and share that continent with her. I love that they dream but I love also that they are learning the value of hard work and the reality of the life that accompanies it. Dreams don't just come true if you dream hard enough. You have to work at it.

So on a recent Friday night in April, we experienced what was typical for us. Said another way, I knew on a high level what was in store for me when I got home from work, but the little lines in between that story are too hard to read ahead of time. The lines that stand out in bold are the tagging of calves, the branding of the babies belong to the first-calf heifers, the herding of the cow-calf pairs out of the calving pasture. And those little lines in between that are hard to read? On this April evening they included watching a kid learn how to wrestle a calf (and succeeding), observing the personalities of the cows that needed to be moved (which indicates the level of encouragement with which you move them), deciding which cows are next to calve, milking a cow that is not as keen on that idea as her people are (and who is not above throwing around her 1200 pounds to prove it), and above all reveling in the moment that is ranch life in the spring.

This is reality. This is what we do. We're exhausted. But we're happy.

And we're lucky because we know that much like that dog in the picture above, throwing yourself into the situation with intensity, zest for life and a pure joy and sense of amazement at what the world throws at you each day is enough. And when we do eventually get to go to Paris or Pittsburgh? We'll love it, of course, but we'll be ready to come home. There's nothing like getting away to exotic places, but there's also nothing quite like getting to come back home to our little corner of the world. 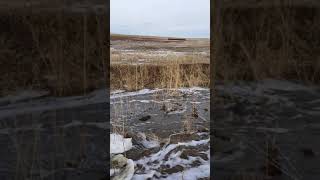